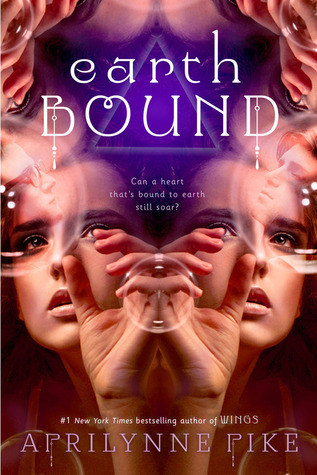 Title: Earthbound
Author: Aprilynne Pike
Rating: ★★★
Synopsis: Tavia Michaels is the sole survivor of the plane crash that killed her parents. When she starts to see strange visions of a boy she’s never spoken with in real life, she begins to suspect that there’s much about her past that she isn’t being told. Tavia will soon to discover that she’s an Earthbound—someone with the ability to create matter out of nothing—and that she alone holds the key to stopping the Reduciata, an evil society that manipulates global events for its own shadowy purposes. Tavia will ultimately have to make a choice: to come into her powers and save the world from the evil Reduciata or to choose free will and a love of her own.

Thank you to Razorbill and Netgalley for this advance readers copy.

I have to admit, Earthbound managed to surprise me. When I think of Earthbound, I usually think of the SNES game from 1995, not an intriguing mystery about a girl with the ability to create matter out of nothing. The book is not without its problems, but there was something about the narrative that kept pushing me forward.

I’m going to jump into the negatives right away simply because the story has a good chunk of them. For starters, the pacing in this book is a mess. It jumps around from being quick as a bunny to slow as molasses and it really never finds it groove until 75% into the story. The amount of bouncing around, admittedly, drove me crazy at times. The writing is solid throughout, but it does suffer from a lot of “he said” and “she said” in spots, which admittedly, got a bit annoying.

I also thought the insta-love and love triangle in this story was awful. I couldn’t see the positives or attraction to Benson or Quinn. I’m unsure of what had Tavia attracted to the two of them since Benson came across to insincere and Quinn was “special”. The main leads in this story just never hooked me the way the secondary cast did. I found the villains interesting, the world-building to be both frustrating and fascinating at the same time. Earthbound in a lot of ways is a mixed bag, because no one is truly likeable in the story.

I have to admit, Tavia was a decent lead. She admits to her flaws, she’s always seeking self improvement, and she’s trying to come to terms with her power as well as her “identity”. It certainly made for an interesting read most of the time, because Tavia does a great job of painting her world for the reader and giving us insight into her fears and frustrations. However, then she has these moments where she makes a lot of silly decisions that have an obvious right answer that clearly she can’t seem to figure out right away.

Those complaints aside, I found the story really engaging despite the pacing issues. There was certainly a great mystery to uncover, and I feel like Pike does a great job of not giving away all the answers, but only giving bits and pieces for the reader to put together. I also devoured the last 75% because I found myself wanting to have all the answers. Once the mythology elements were added in, I thought it actually added a nice extra layer to the world-building. I also loved the villains, and the surprises towards the end — I dug them quite a bit.

This is the first book I’ve ever read by Aprilynne Pike, I doubt it will be my last. While her characters aren’t amazing, she really does a great job of keeping you engaged with the story and wanting to know more about the mystery, people’s agendas, and of course, how the conflict will resolve. I’m definitely curious as to where this series will go, but it looks like I may have to bump Life After Theft up the reading queue!