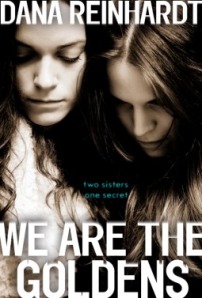 Title: We Are the Goldens

Synopsis: Nell knows a secret about her perfect, beautiful sister Layla. If she tells, it could blow their world apart.When Nell and Layla were little, Nell used to call them Nellaya. Because to Nell, there was no difference between where she started and her adored big sister ended. They’re a unit; divorce made them rely on each other early on, so when one pulls away, what is the other to do? But now, Nell’s a freshman in high school and Layla is changing, secretive. And then Nell discovers why. Layla is involved with one of their teachers. And even though Nell tries to support Layla, to understand that she’s happy and in love, Nell struggles with her true feelings: it’s wrong, and she must do something about it.

Huge thank you to Wendy Lamb Books and Netgalley for this ARC!

I don’t really have much to say about this book other than it was lovely. I loved the writing, Nell’s voice, and the pace of this story. Nell is less than two years younger than her sister and she believes the two of them are connected, that their lives are intertwined. So when Nell gets to join her sister in high school, she’s beyond excited. She sees herself following in her sister’s footsteps, and basically becoming her. Only that’s not what happens…I loved the relationship between the two sisters. I was never close with my own sister growing up, but we did find each other later on in life and now we are best friends. I wish I’d had a better relationship with her when we were younger, and I envied Nell and Layla. But I totally can understand some points in their relationships. I’m actually the older sister, so I could connect with some of the ways Layla was feeling, especially when she wanted her own space. I loved the ebb and flow of this story. It’s told in 2nd person, so Nell is telling the story to her sister and the entire time I was like ‘omg is Layla dead?’ and then spent the entire time trying to figure out if she killed herself over what must have become a scandal, with her dating a teacher. But then at the end we never really find out… maybe this was an apology. Maybe it was Nell explaining to Layla why she was going to do what she did. Or maybe it was a story to a dead sister. I hope it wasn’t though. And I guess the ending leaves you wondering because you’re supposed to hope. The entire story is told juxtaposed against the death of two brothers whom Layla and Nell both knew. One brother died (possibly from drugs) and the other one followed later (possibly a suicide). I want to believe that Nell was able to help her sister and that they were able to survive together, because I can’t imagine Nell without her sister. This was a super fast read and it totally drew me in. I couldn’t stop reading because I wanted to know so badly how things were going to turn out. So when I did get to the end and was left to wonder… well that dropped it down a star. I’m not a huge fan of open-ended novels. But the writing, the sister and family relationships, even Nell’s relationship with her best friend Felix… they were all so rich and detailed and I loved them.