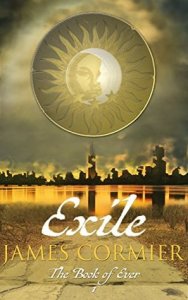 Synopsis: Centuries after the Fall, the United States has been wiped away. The crumbling remains of the great American empire are home now only to savage, lawless tribes and packs of ravening Damned-the twisted children of the apocalypse. Most of those few who survived humanity’s destruction spend their short lives in a violent struggle for survival. But some light still flickers in the darkness: the Blessed of Bountiful live in seclusion, relying on walls both physical and spiritual to protect them from the Desolation that their world has become. Among them are the Saints, those few men and women born with superhuman abilities that the Blessed see as gifts from God. The violent apostate tribes of the Northeast Kingdom have always been a danger, but up until recently its small size and the vigilance of its people have made Bountiful an unappealing target. As attacks on the community grow harsher and more frequent, however, even the steadfast Blessed are forced to start preparing for the worst. With her home’s very existence threatened, seventeen year old Ever Oaks, a Saint with the power to heal, is forced to make a difficult choice, one that may come to define her people’s future…

Huge thank you to the author for providing me with a copy of this book for review. In no way is my review biased due to this. My opinions are my own.

I will admit that I don’t often review indie or self pubbed books but I made an exception for this one because the author is local (MA) an it just sounded interesting. I haven’t read a good dystopian in awhile and I thought why not.

I’m SO glad I read this! I loved it! I was so INVESTED in it and didn’t want to put it down. It’s very well written and really touched a lot of things that I love about dystopian, sci-fi and even fantasy. I love it when dystopians are SO dystopian that they’re thrown back into the stone ages.

Ever Oaks and her village are Blessed. They’re survivors of The Fall (the end of the world basically) and some of her people are gifted with super-human abilities and deemed Saints. Ever is a Saint with the power to heal. She lives in a very, VERY religious society where men are in control and women are basically owned by their father’s and husbands. We know this is the future but it feels so very much like the past.

Ever is a good girl, a godly girl, but she does what she wants and when her village is attacked by the outside tribes who live savagely and witout God, she joins the quest to find her people a new home. She leaves with three other men to head north to find a new home. What they find instead is a powerful enemy, the truth about The Fall and Ever’s destiny.

When I first started this the religious part threw me for a loop. I’m not a fan of traditional religion and while this is very much based on Christian belief it was never preachy and I loved how much of the society and customs were based in this old belief system. I never once felt anything negative towards the religious aspects of this book and usually when I read books with religion in them I can usually find something that makes my stomach twist the wrong way. But this was beautiful and the intent of the religion in this book was not to preach as you.

I loved the world building in this. There were times that I felt elements of The Walking Dead, other times elements of Divergent. Never did this feel like it was trying to be those. It just felt very familiar and I liked that. So often dystopian novels try to make things TOO different and crazy and I’m just left wondering how that could have happened or WHY that happened. But this book had a wonderful set up and world build and when the story took unexpected twists and threw in some sci-fi elements I was ready for it and enjoyed it greatly.

The unexpected twists were SO good. I thought that this was going to be a journey book (which is part of why I picked it up, because I’m a HUGE fan of survival and journey stories) and while it was, it wasn’t in the way I thought it was going to be. I thought I had it pegged and then there were two twists that made me SO happy that this WASN’T predictable and made me love it even more.

And let’s talk about the romance for a second. While the beginning was a little bit fast (Ever and Jared spend a day together and at the start of the day she was annoyed with him and at the end of the day she admitted to having some different feelings towards him… thought they DID go through a lot together in that one day) I liked how it smoothed out and grew. The book isn’t heavy on romance, but man, when things did come together I felt that flutter that I get when two characters I’m rooting for finally kiss.

Overall this was a GREAT book and if you’re a fan of Divergent, The Birthmarked Trilogy or dystopian survival stories then you’ll want to check this out. I can’t WAIT for the next book!