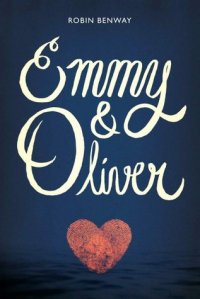 Synopsis: Emmy just wants to be in charge of her own life. She wants to stay out late, surf her favorite beach—go anywhere without her parents’ relentless worrying. But Emmy’s parents can’t seem to let her grow up—not since the day Oliver disappeared.

Oliver needs a moment to figure out his heart. He’d thought, all these years, that his dad was the good guy. He never knew that it was his father who kidnapped him and kept him on the run. Discovering it, and finding himself returned to his old hometown, all at once, has his heart racing and his thoughts swirling.

Emmy and Oliver were going to be best friends forever, or maybe even more, before their futures were ripped apart. In Emmy’s soul, despite the space and time between them, their connection has never been severed. But is their story still written in the stars? Or are their hearts like the pieces of two different puzzles—impossible to fit together?

Huge thank you to Harper Teen for allowing us to read this book!

I’m not sure I can do this book justice with a review but I will try. First off Robin Benway is one of my favorite authors. I read AKA last year and fell in LOVE with her writing. I love the humor, the dialog, the relationships and the seriousness that she can write and pack all into one book. I love the way she writes friendships and romantic relationships and families.

Emmy & Oliver was one of my most anticipated books of 2015 and it is now one of my favorite books of all time. I was so scared to read it because I had hyped it up so much to MYSELF that I was worried that I wasn’t going to be as in love with it as I WANTED to be (this happened with one of Benway’s other books,The Secrets of April, May, and June. The only book of her’s that I didn’t give 5 stars to) but I was. And this book is more than good. It is literal perfection.

We all know the story of this book. It’s simple really. A boy gets snatched away by his father at the age of seven. Ten years later he is found. And he comes home. Only it is not the homecoming that everyone expects. Because Oliver wasn’t taken against his will. He wasn’t held at gun point every day and told that if he didn’t stay put that he’d die. He was living with his father, growing up. Sure there were a few weird things going on, and he was devastated about some of the lies that his father told him (that he didn’t know were lies until later on), but he had a life, a home, and he was happy.

Now I’ve never been kidnapped, but I have ‘left’ and I think anyone who’e ever ‘left’ and then ‘come back’ (for me it was leaving the country for seven years) you can understand just an ounce of how hard it must be to come back from what Oliver had come back from. For me things were different, people were different, but they expected me to be the same. And I expected that of them too. We forget how much we grow and change over time. And Oliver’s family and friends had trouble with that.

Along with Oliver’s story we have Emmy who struggles with her extremely overprotective parents. Emmy and Oliver lived next door to each other and when he was taken her parents were there to support Oliver’s mother. And they then lived through the entire horrible ordeal with her and basically channeled their anger and fear into protecting their only daughter… and thus gave her very strict curfews, controlled her plans for college and always told her what to do. They were really good parents, and I loved Emmy’s relationship with them, but they were a bit overbearing. And this does come to a head because Emmy loves to surf (something her parents would freak out about if they knew she was doing it) and often lies to her parents to do what she loves.

I also loved the more subtle stories woven in with Drew (who struggles with his family not 100% accepting that he’s gay) and Caro (who struggles with not being noticed in her huge family of six kids at all) and their friendship with Emmy and then Oliver when he comes back. I loved the interactions between these four and it made me super nostalgic for high school and parties (siighhhh I really am getting old!).

And the romance. I loved it so much. It was slow build and then explosions and just gave me ALL. THE. FEELS.

I really hope that my review doesn’t overhype this book for others but for real you just need to read this book, especially if you are a Robin Benway fan. This book does not disappoint and now I am really sad that it’s over!!!

So, Emmy & Oliver. I have to admit, I was really nervous going into this one having seen a lot of the reviews be all over the place. However, then I asked myself, “Sam, why are you worried? You know Robin Benway books mean fun, crazy, good times.”

Sadly, that sentiment is not true of Emmy & Oliver, as this is a book that will punch you hard in the feels, and then repeatedly take a few more punches in hopes that it will drill it’s emotional turmoil into your soul. I digress, but I loved this book and am completely reminded of why I think Robin Benway is a strong writer in the young adult world.

If there is something Benway excels in the most, it’s crafting relationships amongst her characters. Especially, friendships. In this story Emmy has two partners-in-crime, both who get an intense amount of development considering they are secondary characters, and their stories are equally as wonderful as that of the main plot that drives the novel. I thought Caroline and Drew’s stories wonderfully tied is, from Drew’s family not accepting that he’s gay, or Caroline feeling invisible because of her large family, it parallels so well to Emmy & Oliver’s stories.

This novel really is about the level of disconnect that parents often have with their children. This idea that they know better, or what is best, and you see this constantly throughout with the four teens that Benway focuses one. Each with their own struggles of identity, desire for approval, or just even trying to get their parents to comprehend their wants and desires, Benway does an amazing job at putting the reader at the forefront of these problems and she doesn’t provide an easy solution for them either.

Oliver by far gets it the hardest, and it’s why he’s such a fascinating character. He’s someone who was kidnapped at a young age, and didn’t entirely understand what was happening around him. His struggles are so real and he tries so hard to assimilate himself into a world where he once belong. Couple that with the fact that his mother confiding in Emmy’s family, and you see that Oliver’s disappearance begins to directly affect Emmy’s life — her parents becoming overprotective, strict and difficult. They are a pair though, and Benway does a great job of showing the reader how life was before the kidnapping and after, and how Emmy and Oliver truly are a part of each other’s lives. They have this intense, symbiotic relationship, and even after ten years though it’s difficult for Oliver, Emmy becomes a pillar of strength, and roles reverse and so forth.

Robin Benway does an amazing job of keep readers engaged withEmmy & Oliver. I may have read it at a slow pace, but it was one of those books I found myself devouring word for word because I was invested in these characters and their hardships. I’ve sadly never dealt with the issues they have faced (I grew up in a fairly open family). I feel like this is Robin Benway’s best novel yet, and if you are a fan or her work or you just want an emotional connection with, this is a perfect read.