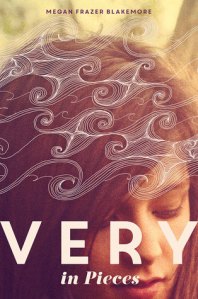 Synopsis: Very Sales-Woodruff is done being a good girl. Done being the only responsible one in a family that’s unraveling. Done being the obliging girlfriend in a relationship that’s sinking. Done saying no to what she wants—like Dominic, her rebellious classmate.

With her mom’s drinking, her dad’s extended absences from home, and her younger sister, Ramona, running wild, the path Very has always seen for herself doesn’t seem to matter anymore. At the same time, Very’s grandmother, a poet known less for her work and more for her exploits with the likes of Andy Warhol and Arthur Miller, is slipping away.

If everything else can fall to pieces, why can’t she?

Huge thank you to the publisher for sending me a copy of this for review!

This book is GORGEOUS. I was initially interested in it because of the cover and because it had a strong grandmother/granddaughter relationship in it. I was also interested in the eccentric family with the normal girl holding them all together.

This is a coming of age story about a Very (full name Veronica) trapped in a world full of artists and writers and musicians. Her grandmother is a famous poet, her mother and father both university professors and acclaimed artists/writers. Her younger sister is a gifted artist as well. And Very is good at math. She loves numbers and equations. She’s sensible and logical. Going into this book I expected the family to be full of manicpixiedream-people but they aren’t. Everyone felt very real and genuine and I could easily picture them all. A mother who is very blahzey about most things, who enjoys a little too much wine (but not in an outwardly destructive way) a father who is too focused on his own goals. A young girl who is lost and nobody is there to help her so she collapses in on herself, reaching out in the only way she knows how… and the grandmother… she’s dying and nobody but the family knows (well, some people outside of them do, but it’s not super public knowledge) and she is spending her last days with Very, spinning glamours stories about her past, her life as a poet (who writes a lot of sex poems) and Very is so enamored with her grandmother that she doesn’t see past the shiny, gilded veneer.

I really felt for Very. My family was similar (minus the art/writing/music aspect) and at times I felt like I was the one holding everyone up (sometimes I still feel that way). I also went through a horrible time losing my grandmother (which made this book REALLY hard to read in August because that’s the month I lost her), and I struggled with how people perceived me much as Very does. Due to being surrounded by eccentrics, everyone has put Very in a box and whenever she tires to step out of it, people are like OH WHAT OH NO YOU DON’T and they push her back in. She’s going to an Ivy league school, she’s dating the good boy, she’s doing the right thing. So when the school’s “bad boy” tries to befriend her and she discovers that he’s actually not THAT BAD a guy everyone is there to push her away from him because HE’S a bad influence on HER and there’s no way that SHE could be a GOOD influence on HIM. And I’ve been there too.

The writing in this is beautiful. There are a few poems (the grandmothers) and the chapters are written in some poetry format that I can’t remember from my poetry days but I liked the set up and the way things flowed and it was just gorgeous.

This book will resonate with fans of Jessi Kirby and Sarah Dessen for sure!