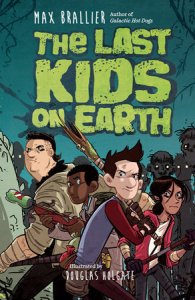 Title: The Last Kids on Earth

Synopsis: Ever since the monster apocalypse hit town, average thirteen year old Jack Sullivan has been living in his tree house, which he’s armed to the teeth with catapults and a moat, not to mention video games and an endless supply of Oreos and Mountain Dew scavenged from abandoned stores. But Jack alone is no match for the hoards of Zombies and Winged Wretches and Vine Thingies, and especially not for the eerily intelligent monster known only as Blarg. So Jack builds a team: his dorky best friend, Quint; the reformed middle school bully, Dirk; Jack’s loyal pet monster, Rover; and Jack’s crush, June. With their help, Jack is going to slay Blarg, achieve the ultimate Feat of Apocalyptic Success, and be average no longer! Can he do it?

Huge thank you to Penguin Canada for this ARC!

I am really enjoying all these new middle grade novels that integrate illustrations as a huge part of the narrative. It really helps to capture the story, characters, and it adds to the immersion level. The Last Kids On Earth is an absolutely hilarious adventure of children attempting to survive a post apocalyptic world. Think of it as a child-friendly version of Zombieland (the film) and that is this book.

The story itself is absolutely hilarious. Jack, along with Quint, Dirk and June, must survive zombies, monsters, and other unique creatures. Their city has gone to crap, and yet they prove that there are unique ways to be resourceful. Jack is a fun protagonist — he’s spirited, goofy, and he tries to be a tough guy. He’s kind of a wuss, but a lovable one. Sadly, he wasn’t my favourite character as that was reserved for June, who I wish had been a larger part of the story. I love that she calls Jack out on trying to damsel her, I love how kick butt she is, unafraid, fearless, and she makes everything look so easy. It’s what makes her a great foil to the three boys, particularly Jack.

The artwork, while it’s only sketches in the ARC is still fantastic to look at. Douglas Holgate’s art really enhances the story, giving it a more comic book like quality in the vein of Diary of a Wimpy Kid, though I’d argue these kids could totally kick Greg’s butt. Holgate’s art does an amazing job of enhancing the story, especially in its humorous moments. And believe me, there’s a lot of humour.

This book is SO MUCH FUN, and it does an amazing job of poking fun at the zombie genre, making accessible to younger audiences without making it gory or scary for younger readers. Furthermore, this book is going to be a hit with middle graders, especially those who love the Diary of a Wimpy Kid series or similar. I think it will get the attention of the reluctant readers out there because it’s charming, hilarious, and action-oriented. I am eagerly looking forward to the promised sequel, as I think Max Brallier and Douglas Holigate are a match made in heaven.