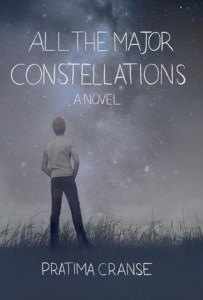 Title: All the Major Constellations

Synopsis: Now he’s leaving high school behind and looking ahead to a fresh start at college and distance from his obsessive crush. But when a terrible accident leaves him without the companionship of his two best friends, Andrew is cast adrift and alone—until Laura unexpectedly offers him comfort, friendship, and the support of a youth group of true believers, fundamentalist Christians with problems and secrets of their own. Andrew is curiously drawn to their consuming beliefs, but why? Is it only to get closer to Laura? And is Laura genuinely interested in Andrew, or is she just trying to convert him?

This provocative and compelling debut novel will resonate deeply with readers as it explores questions of identity, sexuality, and spirituality.

Huge thank you to the publisher for sending me a finished copy for review!

So this book was very weird. But in such a way that I ended up liking it. I did find the voice a little difficult to get into at times and the writing felt a little simplistic, but for some reason I was totally engaged.

Our MC, Andrew, has a messed up family life. His brother is a big time college football player and I think that Andrew’s dad resents him for not also being someone to vicariously live through. Rather than playing sports Andrew would rather spend time with his dog or two best friends. Andrew also enjoys obsessing over the “most beautiful girl from school”.

The relationships in this book were very interesting and I really enjoyed the dynamics that Andrew had with everyone. He doesn’t get along with his family and has outcast himself. His mother is too scared to do anything to support Andrew, so she just leaves him alone, hoping that he’ll stay out of his father’s way. Andrew’s dog is constantly at his side, and the love and care that he shows her is amazing. There’s a moment in the book where he loses the dog while they’re playing near the river and I almost lost it. Thankfully the dog is okay! Andrew’s two best friends are girls; smart girl Marcia and fun, flirty girl Sara. The three are very different but they work. They’ve been friends forever and they balance each other perfectly.

So when Sara gets hit by a drunk driver and falls into a coma, and Marcia’s only way of coping is by staying at Sara’s side, caring for her in the proxy of Sara’s mother (who has to keep her job to keep her health insurance), Andrew is lost. He’s never been alone. He doesn’t deal well when his brother comes home for the summer (and gets into some messed up shit. I really wish that things had gone different with that story line… but this book take’s place in the mid-90’s, so I’m not surprised with the direction it took :/) and somehow ends up getting Laura (the most beautiful girl at school)’s attention.

Only the thing about Laura is that she is deeply religious. She belongs to a group of fundamentalist Christians and she invites Andrew to join them. Andrew is so crazy about Laura that he says okay, and finds himself enjoying his time with them. He tries to learn more about their faith and even has a few weird “come to Jesus” moments… but are they really divine intervention or just manifestations of the stress and anxiety he’s feeling? I really enjoyed how Andrew explored religion. I think it’s something most teens face at some point in time. I know that I read a lot of Christian fiction when I was young just because it was what was available at the library. And there were times when I thought about religion and how it pertained to me.

Andrew later beings to see the cracks in the perfect facade that Laura’s groups is putting on, and he questions what even some of them are doing in the group… and how good they all really are. Andrew is never quite sure if Laura invited him because she truly cared or because she saw a chance to convert him.

Over all this was a very complex novel with a lot going on and I really enjoyed digging into it.