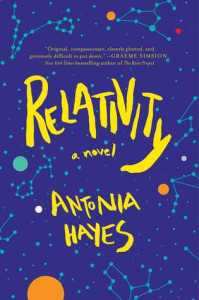 Synopsis: Twelve-year-old Ethan Forsythe, an exceptionally talented boy obsessed with physics and astronomy, has been raised alone by his mother in Sydney, Australia. Claire, a former professional ballerina, has been a wonderful parent to Ethan, but he’s becoming increasingly curious about his father’s absence in his life. Claire is fiercely protective of her talented, vulnerable son—and of her own feelings. But when Ethan falls ill, tied to a tragic event that occurred during his infancy, her tightly-held world is split open.

Thousands of miles away on the western coast of Australia, Mark is trying to forget about the events that tore his family apart, but an unexpected call forces him to confront his past and return home. When Ethan secretly intercepts a letter from Mark to Claire, he unleashes long-suppressed forces that—like gravity—pull the three together again, testing the limits of love and forgiveness.

Huge thank you to Simon & Schuster Canada for this ARC!

Relativity was a book I had heard nothing about until it appeared in my mailbox. I’ve been trying to get myself to read more adult fiction again, despite running a mainly MG and YA focused blog. There’s a lot of good in this book, though for me there was also a lot that held it back as well.

The book follows three main characters, Claire, Mark and Ethan, who are all family. Ethan has a unique generic case where he is able to see physics. He also has been separated from his father, Mark, for many years and wants to be reunited with him. Claire, Ethan’s mother, believes that the amount of sacrifices she had made for her family has amounted to her neglecting her own needs in life, but still feels as though she can’t put her needs before that of her child.

I really dug the emotional struggles that were present in the novel, because each of the characters all had different problems resulting in a need for wanting to be selfish. Claire has made sacrifices to no end but doesn’t feel valued, Mark wants his career and a family but doesn’t want to make either of these actually work, and Ethan is the product of two people who in a lot of ways didn’t necessarily want him for different reasons. It’s really sad to watch a lot of these people falling a part and the novel doesn’t really allow them to entirely get back together either.

That being said, while the plot was interesting, the writing was kind of bland. It was either over saturated in metaphors or everything felt so plain and direct. While I could sense the emotional struggles within the characters, sometimes I felt like the writing wasn’t able to convey that strongly. It definitely had it’s heartfelt moments, which I think fit the tone of the story well, and I liked the level of research that went into describing Ethan’s Shaken Baby Syndrome, and the backstory to that was intriguing, but I wish the writing did a better job of making me emote as a reader.

Relativity is a decent read, and I think for some readers will be an easy book to connect with. The overall story is really interesting and well put together, even if I found the writing a bit overdone or even lacking in places. It’s great for those though who want to be invested in a small scale story with only a handful of characters.