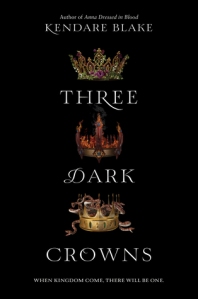 Synopsis: Every generation on the island of Fennbirn, a set of triplets is born: three queens, all equal heirs to the crown and each possessor of a coveted magic. Mirabella is a fierce elemental, able to spark hungry flames or vicious storms at the snap of her fingers. Katharine is a poisoner, one who can ingest the deadliest poisons without so much as a stomachache. Arsinoe, a naturalist, is said to have the ability to bloom the reddest rose and control the fiercest of lions.

But becoming the Queen Crowned isn’t solely a matter of royal birth. Each sister has to fight for it. And it’s not just a game of win or lose…it’s life or death. The night the sisters turn sixteen, the battle begins. The last queen standing gets the crown.

If only it was that simple. Katharine is unable to tolerate the weakest poison, and Arsinoe, no matter how hard she tries, can’t make even a weed grow. The two queens have been shamefully faking their powers, taking care to keep each other, the island, and their powerful sister Mirabella none the wiser. But with alliances being formed, betrayals taking shape, and ruthless revenge haunting the queens’ every move, one thing is certain: the last queen standing might not be the strongest…but she may be the darkest.

Huge thank you to the publisher for this ARC!

For some reason this year has been the year that I’ve reconnected with fantasy. There’s been a lot that I haven’t liked and so much that I have loved. I went into this book with hesitation because of the mixed reviews. But I’m a fan of Blake’s previous books, so I really wanted to check this out. And dark fantasy has been my jam recently.

This book didn’t disappoint me at all. I had a few issues with the world building and history of the queens, but I kinda let it fall to the side because I was so entranced with the rest of the story. I LOVED the queens, their powers, the people surrounding them. I loved how complex they were, the ways that their lives had shaped them, and how their powers defined them.

I think that Katherine was my favorite queen, followed by Arisone. I really enjoyed all of the side characters too, and the fact that there WAS romance, but that romance didn’t dominate the book. This was the story of three powerful girls trying to find their ways and themselves.

This book is long but I was super engaged and flew right through it. I got to the end and was really upset that there wasn’t more and then kept thinking about it for a few days after BECAUSE THAT CLIFFHANGER.

Ugh, I need more. Def check this out if you’ve been enjoying the dark fantasy that YA has been offering us this past year!