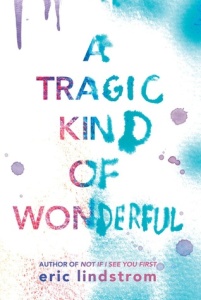 Title: A Tragic Kind of Wonderful

Synopsis: For sixteen-year-old Mel Hannigan, bipolar disorder makes life unpredictable. Her latest struggle is balancing her growing feelings in a new relationship with her instinct to keep everyone at arm’s length. And when a former friend confronts Mel with the truth about the way their relationship ended, deeply buried secrets threaten to come out and upend her shaky equilibrium.

As the walls of Mel’s compartmentalized world crumble, she fears the worst–that her friends will abandon her if they learn the truth about what she’s been hiding. Can Mel bring herself to risk everything to find out?

Huge thank you to Hachette Book Group Canada for this ARC!

I had a weird relation with this book as I was reading it. In fact, for such a short book I had put it down for six days without reading it because something within its contents gave me a reason to. I won’t lie to readers, Mel is a challenging heroine — she’s very distant from the reader, sometimes to the point where you never feel like she’s going to be open enough either. I hit a point with her where I was frustrated and it caused me to put the book down.

After some internal monologue and a few days away from the book, I picked it up again, determined I needed to see it to the end given I have this habit that I don’t like to give up on people or ficitional characters apparently. I am happy I saw her story to the end.

Lindstrom’s writing has a very simplistic quality to it that makes it very engaging. Mel is so into her own mind, thoughts and feelings that she doesn’t see beyond the world. She’s so focused on the death of Nolan, the guilt and anxiety that is present within her and its to the point where everyone she’s ever loved has been pushed far, far away from her. I can relate to that. Sometimes it’s on purpose, other times its just done unconsciously. My frustrations with Mel came from seeing myself in her and I think it’s why a part of me avoided this book for the while that I did.

Mel’s illness is rough, but her reactions and responses are so realistic, right down to the friends she keeps. I really liked the way Lindstrom handled the teenage drama in this book because the responses didn’t feel melodramatic, but rather on point. People do blow situations out of proportion, some people do try to be an alpha in a friendship, some people will try to take all the attention for themselves — all these reactions felt right in place with the story. I felt so angry with a lot of the characters in this book because none of them every stopped to look at the bigger pictures, which again shows a lot of strength in the story being told here.

There are parts of this book that I think will make readers uneasy at times, but I do think A Tragic Kind of Wonderful offers some wonderfully realistic characters trying to seek light in dark places. It is for those who wish to understand those with mental illness, and what Mel feels throughout the story sheds a lot of light on the stigma of mental illness, even if she s a character can feel really infuriating at the same time. If you like deep contemporary YA, this is definitely worth checking out.