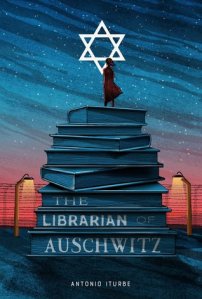 Title: The Librarian of Auschwitz

Synopsis: Based on the experience of real-life Auschwitz prisoner Dita Kraus, this is the incredible story of a girl who risked her life to keep the magic of books alive during the Holocaust. Fourteen-year-old Dita is one of the many imprisoned by the Nazis at Auschwitz. Taken, along with her mother and father, from the Terezín ghetto in Prague, Dita is adjusting to the constant terror that is life in the camp. When Jewish leader Freddy Hirsch asks Dita to take charge of the eight precious volumes the prisoners have managed to sneak past the guards, she agrees. And so Dita becomes the librarian of Auschwitz.

Out of one of the darkest chapters of human history comes this extraordinary story of courage and hope.

Huge thank you to Raincoast for this ARC!

The Librarian of Auschwitz is a novel based on the life of Dita Kraus, a young woman who risked her life to protect literature in a Nazi death-camp. Dubbed “The Librarian of Auxchwitz,” Dita made it her priority to protect the books that were found on the grounds, while also helping those in need during a period of turmoil.

This book is depressing, but important. There is so man sad and horrifying moments that remind you how truly dreadful human beings are. This book reminds readers of the horrors of the Holocaust and how difficult that event truly was. I loved Dita’s courage in the story and I appreciate that as someone as young as she is, she decides to be brave in a place where bravery could potential mean death. There’s a vividness in this translation that gives the reader the sense of tragedy and foreboding. There is discomfort, fear, and sadness in these pages, and I found myself truly feeling for people represented in this story.

This book shows so much hope in the darkness, and while I don’t read a lot of historical fiction, I appreciate the learning opportunities that come from a well researched book. The Librarian of Auschwitz is a slow read, but a thoughtful one throughout.