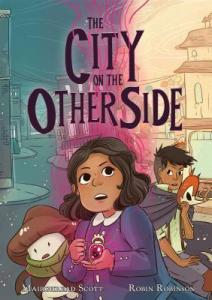 Title: The City on the Other Side

Synopsis: The first decade of the twentieth century is coming to a close, and San Francisco is still recovering from the great earthquake of 1906. Isabel watched the destruction safely from her window, sheltered within her high-society world.

Isabel isn’t the kind of girl who goes on adventures. But that all changes when she stumbles through the invisible barrier that separates the human world from the fairy world. She quickly finds herself caught up in an age-old war and fighting on the side of the Seelie — the good fairies.

Huge thank you to First Second for this ARC!

City on the Other Side was a graphic novel I knew nothing about that happened to show up on my door step. It tells the story of a girl named Isabel who is very sheltered, but after a large scale earthquake, decides she may in fact be ready for adventure.

Isabel is a character I think many readers will easily be able to relate to. She’s shy and nervous, but she grows through the course of the story. Stepping through an invisible barrier, Isabel is transported to a new world where fairies lay. Over the course of the story we see her befriending the fairies and trying to make sense of the difference between the fairy world and where the humans reside.

I have to say, I really liked the artwork in this graphic novel. It’s whimsical, the colours used really pop off the page. There is just so much energy in both the story and the panels, making City on the Other Side a lot of fun to read. The one thing I wish though was that it was just a bit longer. I feel like there was definitely potential to expand the story in different areas, but that’s more of a minor complaint.

If you want to read a great graphic novel with a reluctant, but lovable heroine, please check out City on the Other Side. It’s a great story for younger and older readers alike.