The Toronto International Book Fair happened last weekend and I was fortunate enough to go for free thanks to Random House Canada and a giveaway they held on Twitter. I have to say, what a fun event it was! Not only was able to meet a ton of interesting authors, watch some fantastic panels and speakers, but I was surrounded by books, books, and more books. Books are a wonderfully intoxicating thing, ya know? Also huge thank you to Vikki VanSickle for allowing me to hug her every two seconds. She is the best!

On Friday, I bolted from my classes and made it out to the Metro Toronto Convention Centre. When I got the event I wandered around and eventually I sat in on Eric Walters’ panel, “The Seven Sequels” which he hosted with Sigmund Brouwer, Norah McClintock, Shane Peacock, Richard Scrimger, and John Wilson. Let me tell you, this panel was absolutely brilliant. Not only did they talk about all fourteen novels in this series in less than a hour, but it was basically a whirlwind comedy act wherein they made fun of each other and their characters, but also discussed how one can weave such a large story together when the right people are involved. John Wilson is an adorable Scottish man who is at his most adorkable when he says the word “Scooter.” Eric Walters is a meanie (but I love his books and I think he is hilarious, so that is OKAY!).

The second panel I attended was called “I Don’t Give a Damsel,” which starred Gayle Forman, E. Lockhart, Sarah Mlynowski, and Meg Wolitzer, and was hosted by Elaine Lui, also known as Gossip Laney from CTV’s “The Social.” (Who also made have upset the crowd when she spoiled parts of Gayle Forman’s upcoming novel, “I Was Here.” Oh the faces on the crowd!). These amazing ladies discussed what it’s like to write strong female characters, the difference between realistic vs. “likeable” characters, and the big bad F-word we all love, “Feminism.” I loved a lot of E. Lockhart’s responses to the questions, especially how feminism is an important word that we shouldn’t lose sight or hold of. It makes a lot of women who they are, and we need be able to embrace that word without fear. Needless to say, I found myself nodding a lot with the discussions that were had. Also Gayle Forman is an adorable spaz, who flails her arms and is just really, really cute. I also loved a lot of Meg Wolitzer’s insight and a lot of the research she brought into discussions, but she is an amazing woman to talk with (which I will get to in a sec). 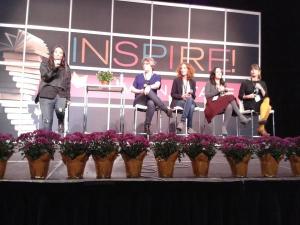 So INSPIRE had a policy that I am not going to bring up, but needless to say, it upset and confounded a lot of the fans who went to the event. A lot of the authors felt very conflicted, so did a lot of the publicists and publishers, but let’s just say I did get into a bit of trouble that Gayle Forman got me out of. I had my copy of “Sisters in Sanity” with me, which if you don’t know, is an out-of-print novel, and it also happens to be my favourite of Gayle Forman’s books, mostly because I think it’s her most unique. When i got up to meet her, she smiled at me and said “You’re the girl with Sisters in Sanity.” I nodded, and pulled out the book, and told her this was the one I wanted to get signed, but I didn’t want to disrupt the policy that had been put into place. She then announced that she would sign it, and if others had books in their hands that weren’t bought at the event, she and the others would sign them too. She made me smile, and we talked for a few minutes about how “Sisters in Sanity” is such an unloved novel (or as she put it, the child no one loved and only sold 12 copies of). Needless to say, she HUGGED ME, and I was just beyond happy. SEE? SEE?!

Gayle Forman loves Sisters in Sanity! AND SHE HUGGED ME.

E. Lockhart also HUGGED ME! And asked if I had “contraband books.” She signed my copy of  The Disreputable History of Frankie Landau-Banks and the book she co-wrote is Sarah, “How to Be Bad.” 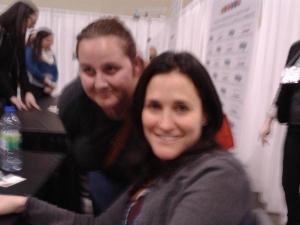 I am sad this picture is blurry and I don’t know where I was looking, but Sarah Mlynowski is a cutie and I loved her.

And now to share my Meg Wolitzer story: so when I was chatting with her, she asked me if I was a writer. I explained to her that while I’m not a fiction writer, I’ve been writing in the games industry for over five years as a reviewer, editorialist and features writer, and she smiled at me. She told me about how she’s learning to play games and how she fell in love with Gone Home! She wanted to pick my brain for more emotionally charging games, because apparently she is writing a novel that is using games in it. She also asked me about #GamersGate and she was just amazing to talk to. Very thoughtful, asked tons of questions, and I was more surprised she wanted to talk to me about this kind of stuff. We also discussed “Belzhar,” which I need to get off my butt and read.

Finally, after that, I met up with Kiki and we wanted some more around the show floor. We found out that Debbie MaComber (aka our moms favourite author) was signing over in the Penguin booth and can I just say she is the nicest, cutest lady EVER? Because she totally is.

DEBBIE MACOMBER! She was so cute and was like “I need to try and look like my author photo but it isn’t working!”  It was also nice to be the same height as someone in a photo.

Then we realized Kate Beaton was signing! She put out these super duper cute tea towels (and we both got one). I ended up buying a copy of “Hark! A Vagrant!” which I didn’t own (but I have her other book), and this happened…

Yes, Kate Beaton drew my dog, Brutus, in my book. It says “Brutus is a love champ.” I nearly died of laughter when I saw it. I adored it. Then we hugged and pictures happened! (But no, I will not show you guys our ugly face photo. NOT HAPPENING. DON’T ASK. Only Kiki has proof.) 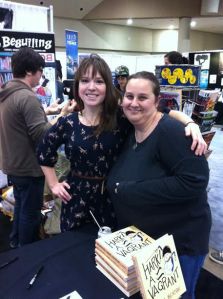 After meeting Kate Beaton, Kiki and I decided we were super duper pooped from all the book fair fun and we went and grabbed Japanese food and headed back home. Home had Brutus snuggles, a mom sobbing about how the new Debbie book signed ON HER BIRTHDAY was the best thing ever, and then there was also lots of tea.

Hope you enjoyed my Friday recap. It was made of a lot of feelings, flails, and books. Check back for my Day 2 & 3 recap coming soon! (Or you know, tomorrow.)

For September’s SIT DOWN! SHUT UP! READ THIS! River and I caved and decided we would finally sit down and read Dangerous Boys by Abigail Haas (aka Abby McDonald). If you aren’t familiar with that name and you love YA, than GET familiar with it. She’s famous for writing Dangerous Girls, which is easily one of the most fucked up (pardon my French) books I’ve ever read (and I read thanks to River because it was my Christmas gift from her last year). There was something about Dangerous Girls that really just kept you on the edge of your seat and kept you guessing. Well, turns out the book didn’t sell very, forcing the author to self-publish the devilish sequel in North America (though UK fan, Simon and Shuster UK picked it up so you are cool!). If you want to read more on that check out Abby’s post here.

That being said, regardless of our thoughts on the sequel (which we both enjoyed but not as much as the first), we really, sincerely hope you support Abigail Haas’ books. They are something different in YA that you just don’t see and they really, really need to be read by more people.

Dangerous by by Abigail Haas

River’s Thoughts: Whew, I flew through that! While it was no Dangerous Girls (a book I read a year ago and STILL think about… need to re-read it ASAP), I did like this a lot. It started off a bit slow and didn’t really start having the same atmospheric feeling that Dangerous Girls had until Oliver showed up. Once he was in the picture though, things really began to happen. The ending was twisted, and I don’t mean to keep comparing it to Dangerous Girls, but it wasn’t as gut-punching-shocking-jfc as Dangerous Girls’ was. So I guess I had really high hopes for this being just as WTF as Dangerous Girls, but in reality i should have separated myself from it a bit more and read it with some distance from Dangerous Girls. Oh well. Still really good and if you liked Dangerous Girls then you MUST get this and read it and support Abigail Haas.

Sam’s Thoughts: I definitely enjoyed this sequel, though not as much as the first book. They definitely are very different beasts and it’s hard not to want to compare them considering they both have very different stories and twists in them. That being said, this book starts out painfully slow and doesn’t provide a lot of give right away. I definitely struggled with the characters this time around until Oliver showed up — can’t say I liked him or Ethan (I get they were polar opposites but they felt so much more one dimensional compared to Chloe), but it does get dark and uncomfortable, especially in the latter half of the novel. I wasn’t sure about Chloe at first, but towards the end of the novel, she grew on me and I understood her “enough” mentality that part of me even sympathized with her (not entirely though). It’s a good sequel, but the twist in this one just seemed to fall a touch too flat for me when you compare it to the original. Still, check it out because there is some really good stuff here, but Dangerous Girls wins hands down between the two for me.

Read Dangerous Boys? Have some thoughts to share? Let us know in the comments!