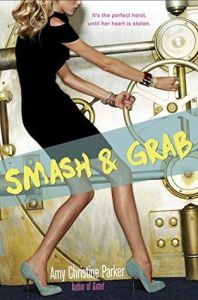 Synopsis: LEXI is a rich girl who loves a good rush. Whether it’s motorcycle racing or BASE jumping off a building in downtown Los Angeles, the only times she feels alive are when she and her friends are executing one of their dares. After her father’s arrest, Lexi doesn’t think twice about going undercover at his bank to steal the evidence that might clear his name. She enlists her hacker brother and her daredevil friends to plan a clever heist.

CHRISTIAN is a boy from the wrong side of the tracks. The local gang has blackmailed him and his friends into robbing banks, and he is desperate for a way out. When the boss promises that one really big job will be the last he ever has to do, Christian jumps at the chance for freedom. In fact, he’s just met a girl at the bank who might even prove useful. . . .

Two heists. One score. The only thing standing in their way is each other.

Huge thank you to the publisher for letting me read an advanced copy of this book!

I REALLY enjoyed this book! After falling into a little bit of a reading slump I needed something fun that would really drag me into the story and not let go. I didn’t want anything TOO heavy and this was just the perfect balance. I LOVE heist movies and books, so I went into this with high hopes and was not disappointed.

Lexi and her crew are thrill seekers. They’re young rich LA kids who have issues with their families and they all deal with these issues by doing crazy and wild stunts. The book starts out with them jumping off a building. I really loved how Lexi and her gang had actual problems and not just rich kid problems. Lexi’s dad is in jail and her mother is falling apart. Lexi’s friends (while not the MOST fleshed out group of side characters) are all personable and facing their own issues. We see glimpses of things that all people face: abusive parents, un-accepting parents, etc. This made the book feel real.

I also liked that Lexi was and wasn’t a stereotype. She’s a typical rich, blond, beautiful LA chick but she is also pretty bad ass. She holds her own and stays true to herself. She uses her looks and charm when she needs to, but she isn’t vapid and vain, nor a mean girl. I really liked that she didn’t quit fit any mold when she really could have.

Christian is the other voice in this book. It is a dual POV book, but the author does an AMAZING job with the two voices. I was never once confused as to who was speaking and that really helped me enjoy this book even more (because I do NOT like dual POV books with alternating chapters). Christian is from the hood and he and his own crew of friends are bank robbers. They were strong-armed into doing the robberies by the local gang which has ties to a much larger Mexican gang. Each friend is working the jobs to help their families/ save people they love. It’s all very tragic and makes them not really BAD guys. Christian was an interesting character; he’s smart, of mixed race so he doesn’t always feel like he fits in with the rest of his crew, and he cares deeply about doing the right thing even when he’s forced to do the wrong thing.

Christian and Lexi cross paths multiple times and sparks fly. They end up joining forces to rob the bank that Lexi’s dad used to work for… to help prove his innocence and to set Christian free. There’s a lot of double crossing, some kissing and swooning and some high action moments with crazy stunts. I very much enjoyed this book and would LOVE to see it as a movie.