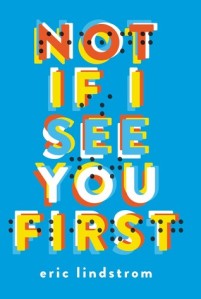 Title:  Not If I See You First

Synopsis: Parker Grant doesn’t need 20/20 vision to see right through you. That’s why she created the Rules: Don’t treat her any differently just because she’s blind, and never take advantage. There will be no second chances. Just ask Scott Kilpatrick, the boy who broke her heart.

When Scott suddenly reappears in her life after being gone for years, Parker knows there’s only one way to react-shun him so hard it hurts. She has enough on her mind already, like trying out for the track team (that’s right, her eyes don’t work but her legs still do), doling out tough-love advice to her painfully naive classmates, and giving herself gold stars for every day she hasn’t cried since her dad’s death three months ago. But avoiding her past quickly proves impossible, and the more Parker learns about what really happened–both with Scott, and her dad–the more she starts to question if things are always as they seem. Maybe, just maybe, some Rules are meant to be broken.

Huge thank you to The Novl for sending me a finished copy of this book!

Guys, let’s be honest. I had an eARC of this and probably wouldn’t have read it but then I got a copy from The Novl and decided that I should give it a shot. I know, I know, the cover isn’t anything special… unless you have a finished copy! IT HAS BRAILLE ON IT! And if you can find a pair of those red and blue 3-D glasses (yes I had a pair laying around, my husband is taking a computer vision class and he got them idek) THE COVER IS IN 3-D AND LOOKS SO COOL! So please don’t judge this cover too harshly (I know it’s very different from the norm in YA covers).

Originally I was drawn to this book (and going to read it at some point) because the MC is blind. If you know me, you know that I have struggled with an eye disease since 2004 and there were times I thought I was going to go blind (and could still possibly go blind in the future if things ever get really bad real fast and take a turn for the worse). I spent the first few years after my diagnosis dealing with treatments and the fear that they weren’t going to work. THANKFULLY at my last eye doctor appointment I was deemed the healthiest I’ve been since 2002 and that things will probably remain steady. SO YEAH. But eye issues and blindness are close to my heart.

Parker, our MC, has been blind since she was seven years old. Her mother crashed the car she was driving and Parker was injured and lost her sight. She grows up with her father, who suddenly dies the June before Parker’s junior year of high school. Parker’s Aunt, Uncle and two cousins move across the country to live with her and take care of her so she doesn’t have to move and re-learn a school/home/city.

Parker is one tough cookie. She’s sassy and honest and a bit brutal at times. She doesn’t let people treat her special or delicate and I loved that. I’ve read a lot about blindness and how blind people usually HATE being restricted. Yes, they can’t see, but they’re still living people who can function! Sight isn’t always what we need to live our lives the best we can… so Parker makes up The Rules; a set of rules that she lives by and makes others respect if they’re going to be around her. Sadly her best friend turned boyfriend breaks one of the rules (one of the MOST IMPORTANT rules) and she freezes him out of her life.

I was able to relate with Parker on so many levels. I’ve always been small and sickly and I’ve always hated it when people would treat me like a delicate flower that’s going to break. I’ve overcome a lot of that and I always feared that if I DID go blind how I’d lose a lot of what I have now. I also understood Parker’s take on relationships and how if you burned her once then you were done. I’m sadly very much like that and have trouble forgiving people and moving on and making amends.

The friendship’s in this book were really well done. I felt like they were very real. Parker has a best friend and then a few other close friends who orbit high school in different cliques. She makes new friends and even goes on a date with a new boy and she learns a lot about herself when she has some problems and comes to realize that she doesn’t always listen to people like she should.

I liked how messy and complicated the relationships in this book were. I really liked the themes of sight and seeing things and hearing and listening. And I loved how not only Parker grew, but her friends did too. And sometimes you don’t really see a lot of character growth in secondary characters.

Overall I am SO glad that I read this book and I REALLY hope others will give it a try. I feel like it’s realistic and well written and respectful towards blind people and the struggles they face.